The word pragnanz is derived from a  German term that means "good figure". This is why the Law of Pragnanz is also
known as the Law of Good Figure or the Law of Simplicity and is the central law of Gestalt Psychology. This law
states that when a pattern is viewed it is broken down and perceived as the simplest form
of an object. For example the picture on the left is perceived as a triangle and a square instead
of a compilation of complex shapes (Goldstein 105). 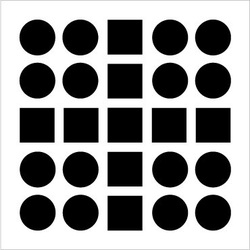 The Law of Similarity states that similar objects are perceived as being grouped together.
The picture on the left displays a group of squares and circles. It is easy to group the similar
shapes together, seeing the squares forming a cross while the circles are grouped
together outside of it (Goldstein 105). 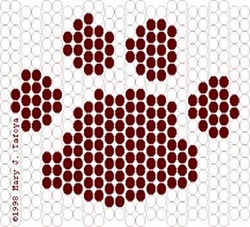 This law explains that objects that are in close proximity appear to be grouped together.
The maroon dots are perceived as paw print because of their close proximity (Goldstein 106).

The Law of Common Fate informs us that objects moving in the same direction appear to be
grouped together. In the case that these dots were mobile, those moving forward would be
grouped  apart from those moving downward.(Goldstein 106). 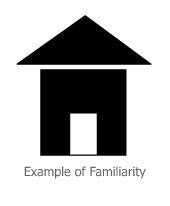 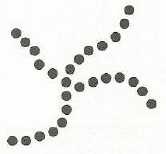 The Law of Good Continuation is illustrated in the figure on the left. It displays that when connected points
result in smoothly curving lines, the lines tend to be viewed in a way that follows the smoothest path. In this
example one would perceive the figure as two smooth intersecting lines rather than a jagged or complicated
path of lines.
Powered by

Create your own unique website with customizable templates.
Photo used under Creative Commons from GollyGforce